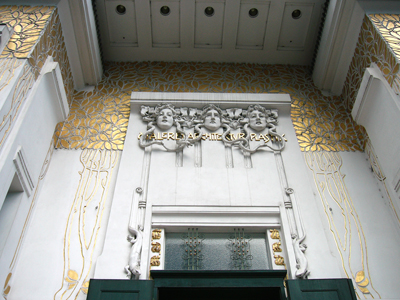 Vienna is a city of art and architecture. Monumental nineteenth century churches and offices share the streets with ultramodern, and sometimes delightfully whimsical, inventive and innovative creations. And there is art everywhere. On the sides of buildings, on the rooftops, on the cornices and on the ground. Vienna speaks to everone, and with many voices. This is a much larger and more bustling city than any we visited in Germany, but it is still quiet by American standards. Electric trams glide so quietly you could be hit by one without knowing it.

Bikes are everywhere, and the city not only provides bike lanes on the sidewalks, it provides the bikes as well. You can pick up a bike complete with front basket and fender/wheel guards (for the advertisers, let's be honest) for nothing. The first hour is free. You can commute to work and drop off your bike, and take another home. Very sensible. A second hour will set you back a euro. You see this service in more and more European cities. Paris just began its bicycle service in July 2007.

The food was great, but not as cheap as in Germany, and like the Germans, Austrians have yet to figure out that smoking is bad. So it's everywhere. The stores were much more international, with names that were refreshingly new to us, but there is still a plague of US fast food, headed up by Burger King. Still no American car presence, though we did see another red PT Cruiser convertible (Nancy's car exactly) in front of the Hundertwasser apartment block. One store that I never expected to see was a Segway store, on the fashionable Parkring. Can't be doing much business as only 4000 have ever been sold in the world, but there it was, as big as a car dealership. Some of the models in the window had huge ATV style tires. Made me laugh. Just what you need in downtown Vienna. Pick up a bike up the street instead.

With all the fabulous buildings, one modern designer absolutely shone out. Hundertwasser is an architect we had never heard of, but who has rocketed to the top ten in one day. His kindergarten colors, uneven patios and floors, and chaotic exterior designs are a whimsical delight. His best work appears in Japan, but Austria has the most examples of the positively Van Goghian sweep of his designs. His philosophy was to break with symmetry and get back to nature. He said that flat floors were unnatural and uncomfortable, so his floors roll and undulate. The sidewalk rolls up to a central fountain at the apartment block, and the staircase railings are not paired - they are different in height and slope. A real treat. We ate at the second level cafe at the Hundertwasserhaus, and it was as offbeat as the rest of the building. The lone waitress worked 15 tables, something we came to learn was not uncommon. She told us she did all this for a three euros an hour, which, we learned, was why waitstaff in Austria always hand you the bill with the admonishment: Service is not included. At the Smutny restaurant that night, about the only hofbrauhaus open Sunday evening in the center of town (and consequently packed tight), the waiter was drenched in sweat as he handled tables both upstairs and down, without the aide of a busboy. This is a darker side of the elegant city, but something every tourist should understand as they wait for the bill. It might seem like the lesiurely pace of not pushing you out the door, but getting around to your table is actually problematic. Be nice.

Hundertwasser follows in a great Viennese tradition set in the early 1900s by the Secessionists, the Art Nouveau artists of Austria. Just as Art Nouveau sprung up independently in countries all over Europe at this time, so in Austria a bunch of young artists (who also could be architects in this era), determined that the rigid rules of the nineteenth century had to go, and their battle cry was heard from the Secession building (1896) that still operates as a museum and gallery today. It is much smaller than the monumental architecture of Vienna, but it's golden ball overhead and its scowling ultramodern owls and sleek black vines clearly announce a break with Hapsburg tradition. This was a real privilege for us to visit.

Another great art nouveau or jugendstil artist and architect was Otto Wagner, who built two apartment buildings four blocks south of the Secession building. One is made entirely of ceramic tiles, featuring a floral and vine motif, and matched in iron on balcony railings. The other is a tribute to women, with plenty of bright gold across the facade. Vienna eye candy.

Vienna is a major. We could spend weeks just doing the museums. Smithsonian huge. We didn't have the time, but at our final lunch at Cafe Pruetchel, we decided we had to come back. Cafe Prueckel itself was so good we regretted not eating there the night before as well. Lots of reasons to spend lots of time in Austria.

Vienna was the last stop on our trip. To see what we saw in Germany, click here.